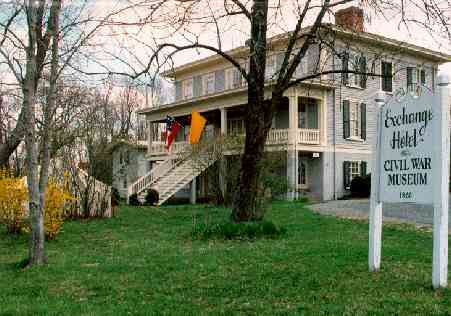 Did you know--The Exchange Hotel Civil War Museum building is an example of at least two strong architectural influences from Europe? Behind those lovely, shady porches is a classic brick Georgian building with a central staircase and central halls on each of the two upper floors. Two rooms open off each side of these halls. The lower floor, a traditional English basement, contained the hotel dining/tavern room.

James Deetz describes this architectural form in his book, In Small Things Forgotten---The Archaeology of Early American Life: "Strictly formal in its adaptation of classical architectural detail, the Georgian was rigidly symmetrical and bilateral, both in facade and floor plan. The classical Georgian house has a central hall that separates two sets of two rooms each. From the front, it exhibits strict bilaterality and balance: a central doorway flanked by paired evenly spaced windows and a central second-story window directly over the door. These windows have multiple panes and sliding sashes in contrast to the leaded casement windows of medieval type used in early vernacular houses."

Some alterations to the classic Georgian style are obvious in the porches and the basement tavern room. These modifications make sense when the building's function, as a hotel catering to railroad passengers, is considered--as well as the need to shield the windows from the hot summer sun.

The exterior of the museum presents an Italianate appearance in accord with its 1859 construction date. The Italianate design exerted a strong influence on American vernacular architecture and was at its most popular during the period just before the Civil War. The monograph, What Style Is It? published by the Historic American Buildings Survey, National Trust for Historic Preservation, describes the Italianate style as having several distinctive characteristics: a square house with low roofs, overhanging eaves with decorative brackets, and arcaded porches. These are all incorporated in The Exchange Hotel.

Georgian and Italianate building plans were distributed by means of design catalogs from England and Europe and were used by professional builders there as well as in America. The local builder responsible for The Exchange Hotel's construction created an amalgam of styles which work together to give us the building in use today. The resulting structure is a beautiful, stately building both inviting and architecturally intriguing.